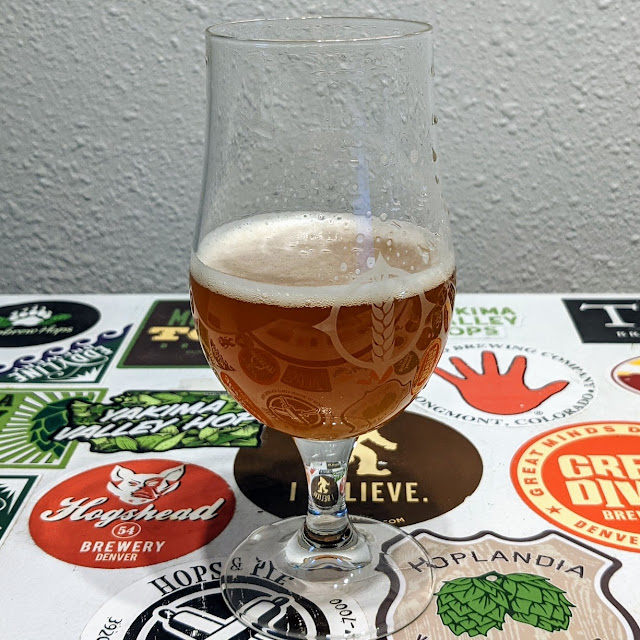 I've been putting off the Wheatwine because of two things, and they both result in terrible efficiency and a frustrating brew day: wheat malt, and large grain bill. Which is why I decided to do this beer as the first brew on my new electric brewing setup. This ended up being a huge mistake: don't make a Big Crazy Beer on your new system until you get the hang of it.

My failure here was not knowing how to best utilize a false bottom. When the pump can't pull any more liquid through, there's still quite a bit of wort left. I ended up leaving that behind because I didn't have a good way to get it out (post brew realization: just remove the bag and dump it in, stupid). Which meant losing 3-4L of precious wort; that's 1/6 of the total which put me at 47% efficiency (terrible) instead of what it should have been: 60% (still terrible, but expected considering lots of grain and wheat malt).

Besides screwing up the wort transfer, everything worked great. The pump pumped. The electric kettle heated. This system is a huge improvement over my previous process which involved brewing everything upstairs, making multiple trips up and down all day, and eventually carrying large wort-filled fermenters down the steps. Now everything is in the same room. As it should be. Since this is the first brew in the new brewery, this post will be filled with excessive photos in an attempt to show all the new goodies and process.

Now about that wheatwine. It's like a barleywine but with a hefty portion of wheat malt. I went with 50/50 wheat and Maris Otter with about 3% Special B for some color and extra malt character. I also beefed up the sugars with 500g of dextrose.

Final Thoughts: This came out... not terrible. But it's not good either. It wants to be a barleywine, but has a distinct fruitiness and mouthfeel that makes it just... weird. It's 100% possible I screwed up the brew, but part of me thinks this is yet another wheat beer I don't like. Interesting one-timer and I'll most likely never make it again.

Getting things started the night before. This is a 3rd generation repitch of Imperial Juice/London III from a saved slurry. 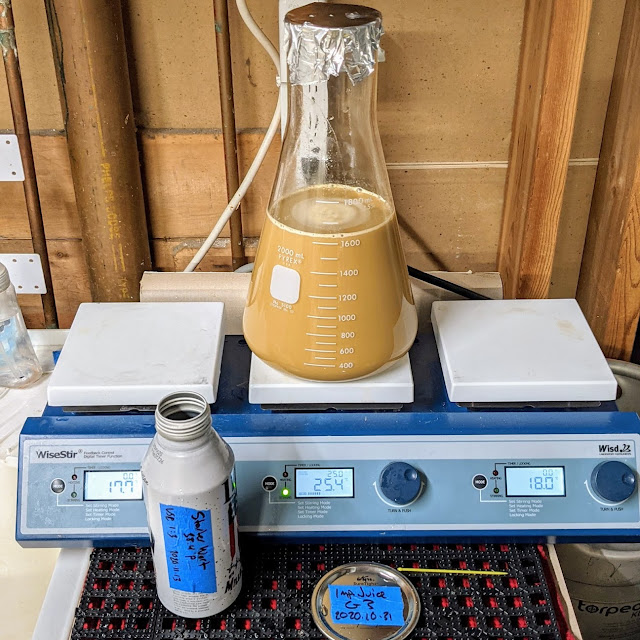 12hrs or so later and we've got some happy yeasties 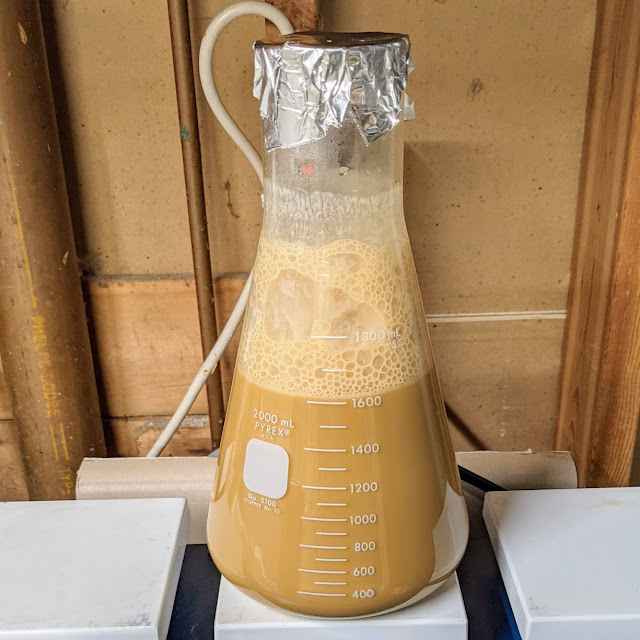 Grains ready for milling. The wheat is under all this. 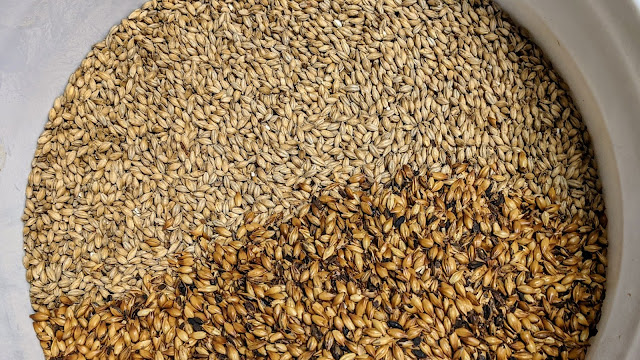 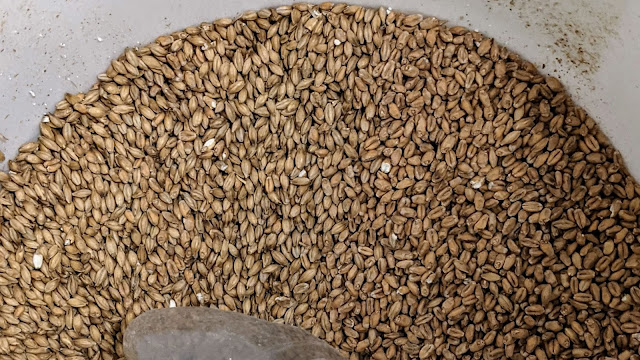 Transferring into the mash tun from the kettle. 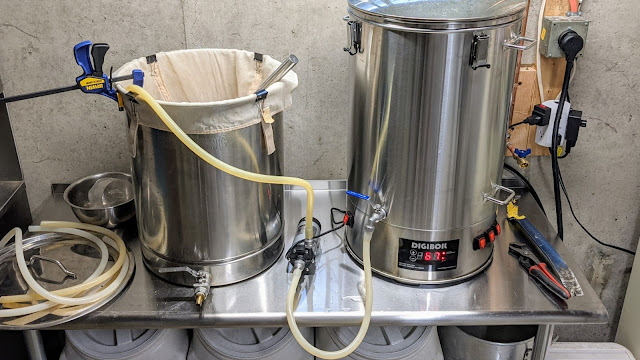 water going into the mash 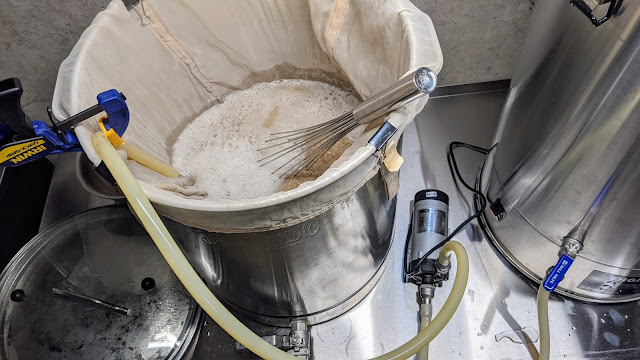 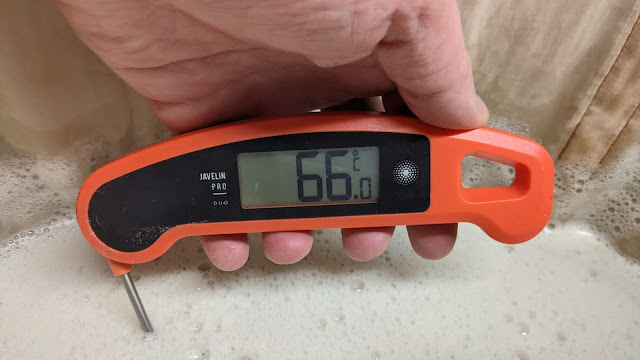 These 4 clips were actually able to suspend the bag above the false bottom for better flow and extra drainage. 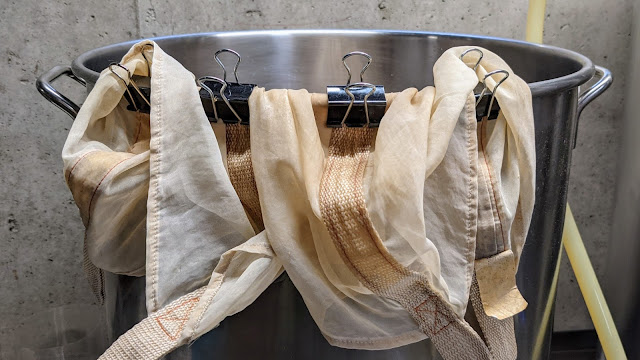 looking into the abyss 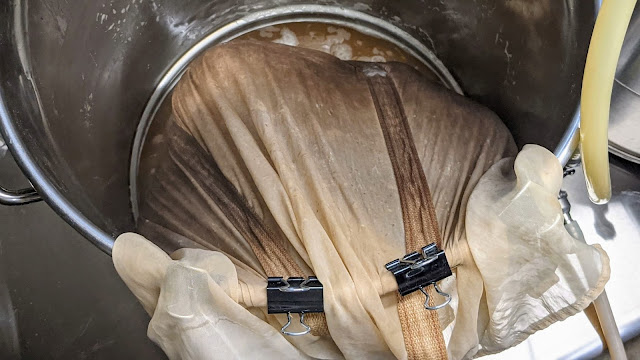 leftover wort that did not get into the boil (oops) 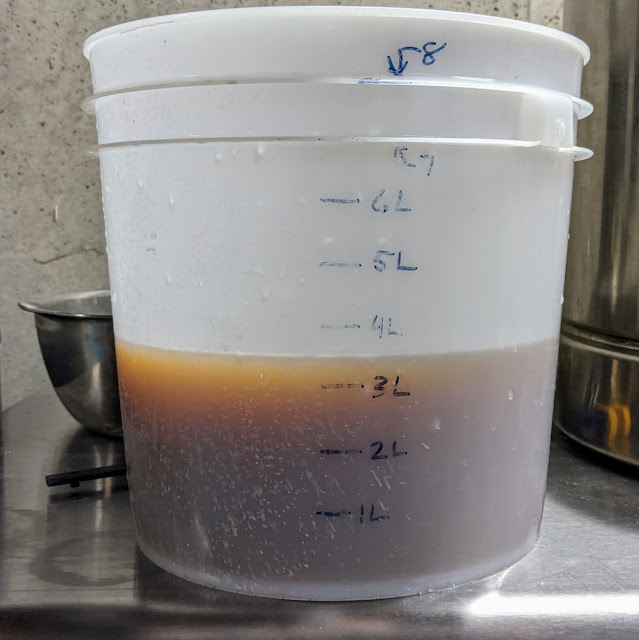 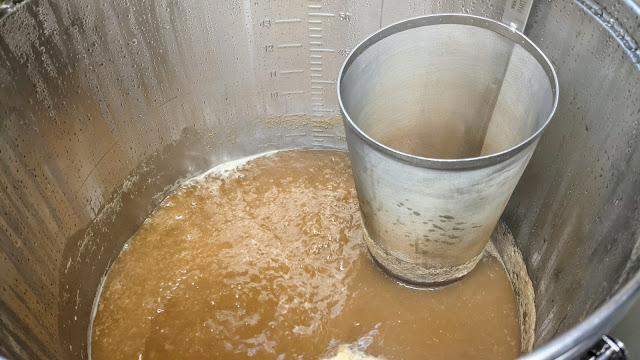 brew session beer: CSB - Centennial Strong Bitter. Just tapped and carbonated so not quite clear yet but getting there. 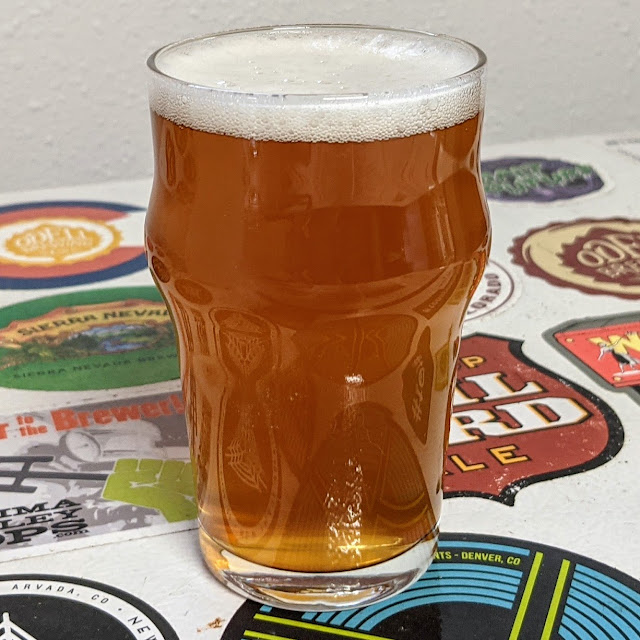 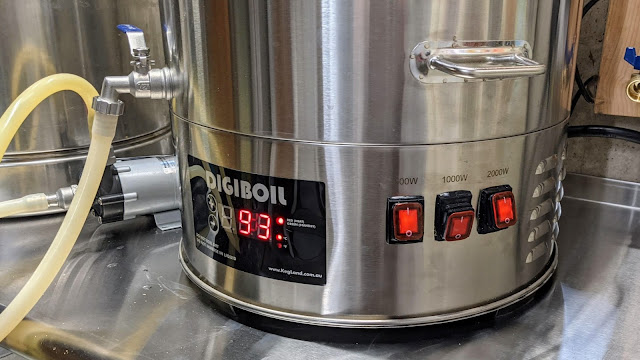 ventilation working pretty well but still a bit steamy. I plan to add a hood to the duct that runs over the brewing table soon. 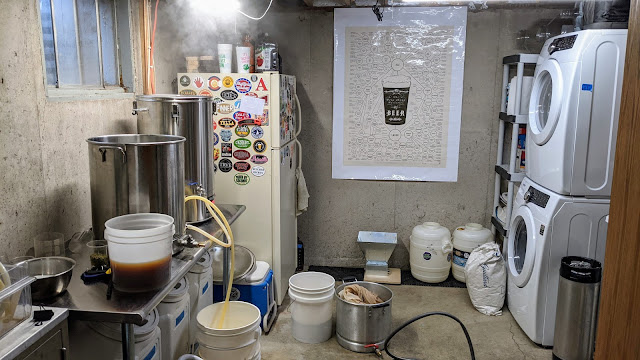 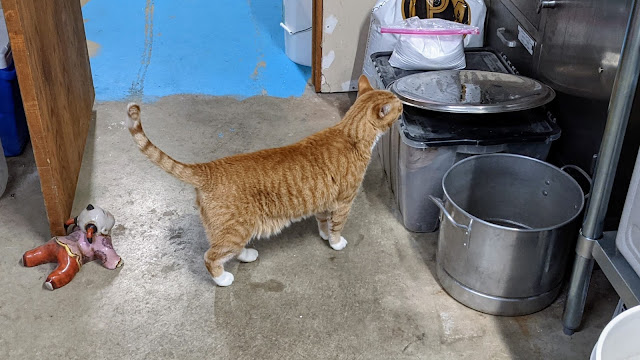 Hey let's run the recirculating wort into the hop spider! 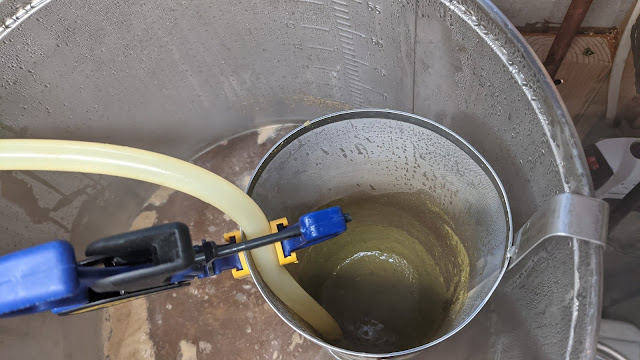 Oops. That didn't work out so well... 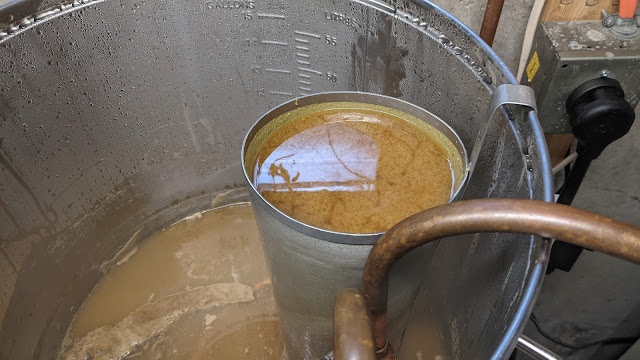 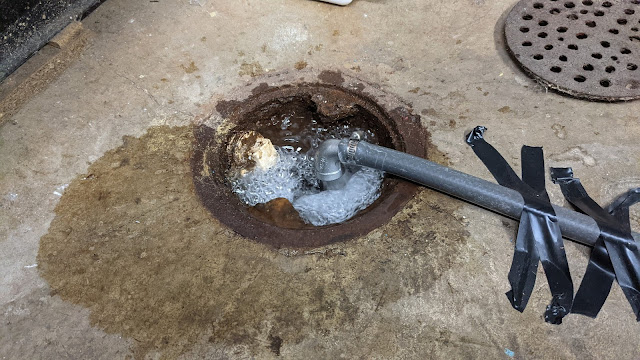 This is really low but 1: I lost about 4L total of wort from the mash, and 2: I forgot to add the dextrose which did bump it up a couple of points to 17°P. If we get good attenuation this could end up around 8% ABV which, although a lower than I had hoped, is acceptable and can still be considered a Big Beer. 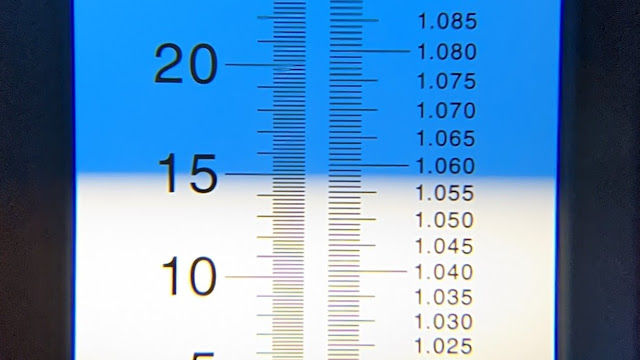 Away we go. I did change this over to a blow-off tube as London III likes to do quite a lot of expanding especially with bigger beers... 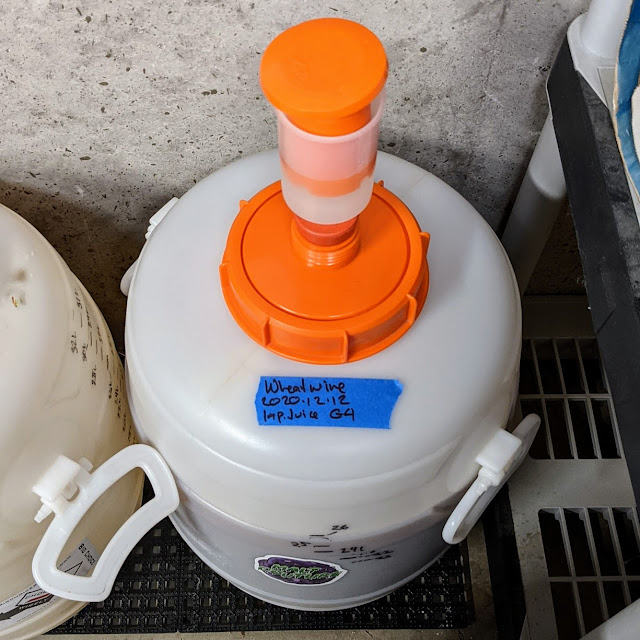 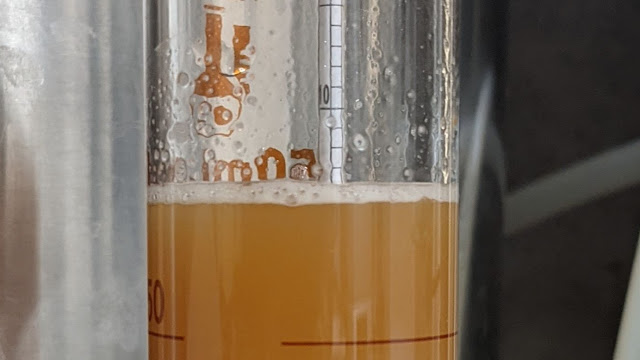 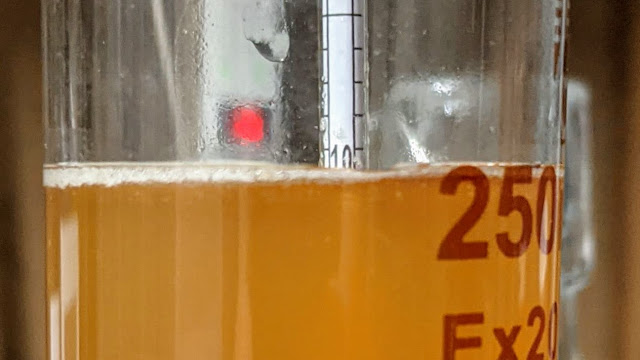 2021-1-12 (+31): Full pour. This is shaping up nicely. Flavors are mellowing and it has that distinct wheat profile and mouthfeel. Lots of fruit on the nose and initial taste - guessing that's mostly from the late dose of Centennial. 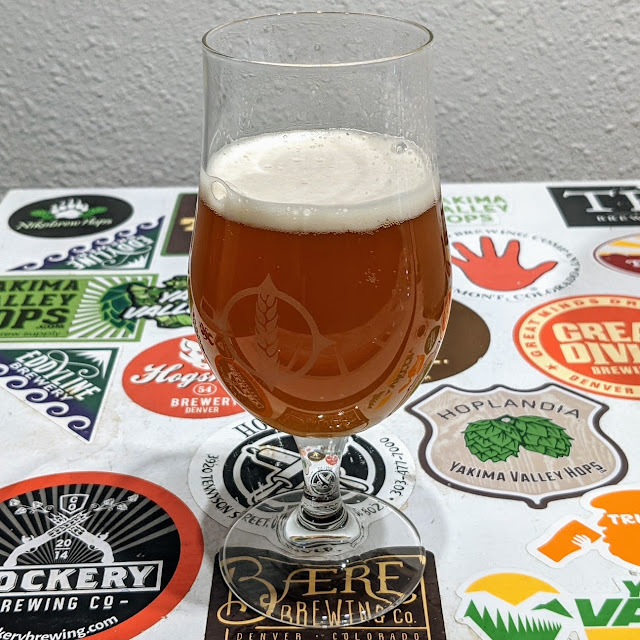 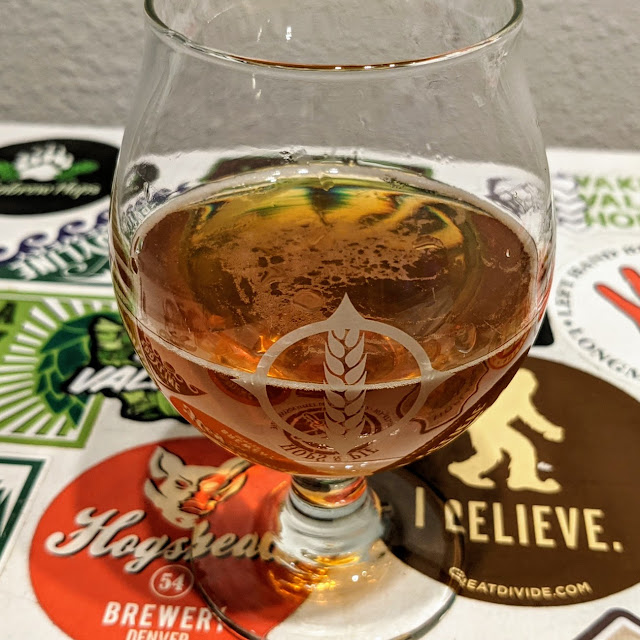